The big college kick off 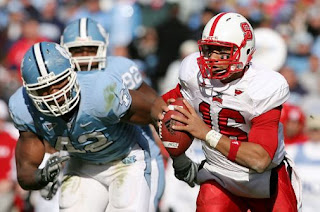 The college football season kicks off today, as does the long road ahead to the 2010 draft. I'll be watching South Carolina at North Carolina State today, with Saturday viewing coming in the form of Navy/Ohio State and Georgia/Oklahoma State. Going back to tonight's game, I'll be particularly interested to see N.C. State's QB Russell Wilson. Ranked by the Sporting News as the best signal caller in the ACC, the sophomore QB threw 17 TD's and only one interception last year after recovering from injury.

I'm sure a lot of Seahawks fans will be showing interest in tonight's Boise State/Oregon game. Could be a tough one for the Ducks, but should they win it'll make a real statement. The Broncos won a thriller 37-32 when the two met in 2008.

Throughout the college football season we'll have scouting reports, stock reviews, mocks and much more so stay tuned. Here's some links to keep you going before kick off...

Bucky Brooks lists his must see games this weekend.

Also from Brooks, his top 16 senior prospects ahead of the new campaign. He ranks Russell Okung (OT, Oklahoma State) the highest ahead of my own personal favorite - Ndamukong Suh. Interestingly, Tim Tebow is absent from the list.

Gil Brandt looks at the top senior safety prospects. It's no surprise to see Seattle-born Taylor Mays at the front. "This is a driver player, who has speed, range and athletic ability. He reminds you of former Giants linebacker Brad Van Pelt, who played safety at Michigan State. He lines up 15 yards deep on most plays. Mays will be a first-round pick and play a long time."

Andy Staples lists his opening week power rankings for the top 25. Unsurprisingly, he has the Florida Gators ranked at number one. "While Florida deserves to be dropped from the poll for starting the most anticipated season in the program's history with a world-class stinker of a match up, the fact that the Gators bring back the entire two-deep depth chart on defense makes that impossible."

CBS Sports are reporting Alabama's talented offensive duo WR Julio Jones and RB Mark Ingram have been cleared to begin the new season. Concerns arose over their legibility this week due to a fishing trip the pair took on the Gulf Coast with businessman Curtis Anderson.

Guerin Emig is speculating that Jermaine Gresham will miss Oklahoma's game with BYU this weekend and could be out for longer. Rumors suggest the highly rated tight end has suffered a knee injury, although nothing has been confirmed or denied as of yet.
Posted by Rob Staton